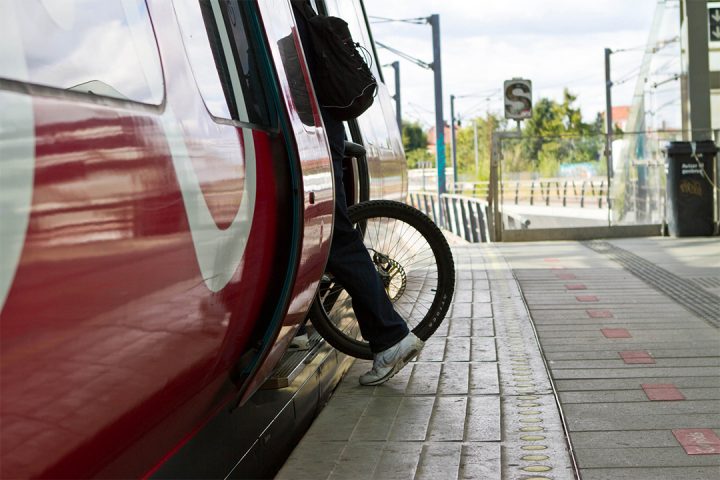 The combination of bikes and trains is attractive, and means you can cycle even if there’s a long way to go between home and work. However, the interplay of many factors determines whether the combination is competitive. In Denmark cities like Odense have shown what good bicycle parking facilities can mean, and the fact that in Copenhagen, for example, bikes are allowed for free on S- trains has encouraged many people to combine the bicycle with collective transport.

Many people combine trains and bicycles

More than one third of train trips with a connection to Copenhagen take place in combination with a cycle trip at one or both ends of the train trip. Almost 30% cycle between their homes and the station, and 10% cycle between the station and the destination. The bike-train combination is most frequent on trips to and from work. The bicycle/train combination is also widespread in other parts of Denmark. The equivalent figures are 20% and 5% respectively. The typical cycle trip to and from the station is one to three kilometers.

The factors that are significant in determining the extent of bicycle/train trips can be divided into three categories:

In Denmark cycling is considered normal or mainstream.  Context factors consequently present relatively few barriers to cycling to the train. Railway service in Denmark isn’t up to Swiss standards, but is still quite good, and is competitive between the larger cities as well as in and around Copenhagen. 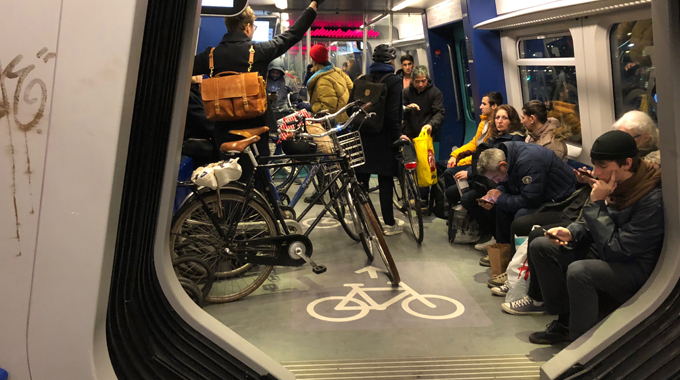 Better options for combining bikes and trains have an impact

Bikes have been allowed for free on the regional train system in and around Copenhagen (the S-train) since 2010, and this has had an impact: around 14% of all S-train travelers and 20% of Copenhagen residents commuting out of Copenhagen by S-train today use the bicycle at the destination end. These are high figures, and they are higher than the equivalent figures for other types of train. They are also higher than Utrecht, Holland where the equivalent figure is approx. 10%. The effect is not only that more people cycle to and from the station, but also that new train trips are created.

Distribution of connecting transport mode to/from trains for trips in relation to Copenhagen (to and from home):
Walking: 49%
Cycle: 27%
Car: 8%
Bus: 16%

Distribution of connecting transport mode to/ from trains for trips in relation to Copenhagen (to and from destination):
Walking: 75%
Cycle: 10%
Car: 3%
Bus:11%

The distribution of connecting transport mode to and from train trips in relation to Copenhagen (the City of Copenhagen and Frederiksberg Municipality) are based on Center for Transport Analytics data for trips on the home end and trips on the destination end of the train trip, respectively: Transportvaneundersøgelsen, TU, 2010-2016

On other types of train in Denmark today, you need a bike-ticket for the Copenhagen Metro and regional trains, but reservations are unnecessary (although bikes are not allowed on the Metro during peak hours).  Bicycles are allowed on Intercity trains with a reservation. The bicycle capacity on this type of train is fairly limited, but the smallest folding bikes are considered hand luggage. Bicycles are allowed on Aarhus light rail outside peak hours, and cycles will be allowed on the coming light rail in Odense at all times.

Countries such as Germany, Switzerland and Holland are ahead of Denmark when it comes to the quality of bicycle parking at stations. However there are also good examples in Denmark.

One of them is Odense Station Center. It was decided to install many different types of parking solutions which would supplement each other, from locked basement parking to uncovered parking on street level, and everything in between. The result is good access from all sides of the station, sufficient capacity, and the individual user can choose the solution that suits him best.  Frequent tidying up of abandoned bikes and bicycles outside the parking facility help create good conditions and a pleasant urban space. 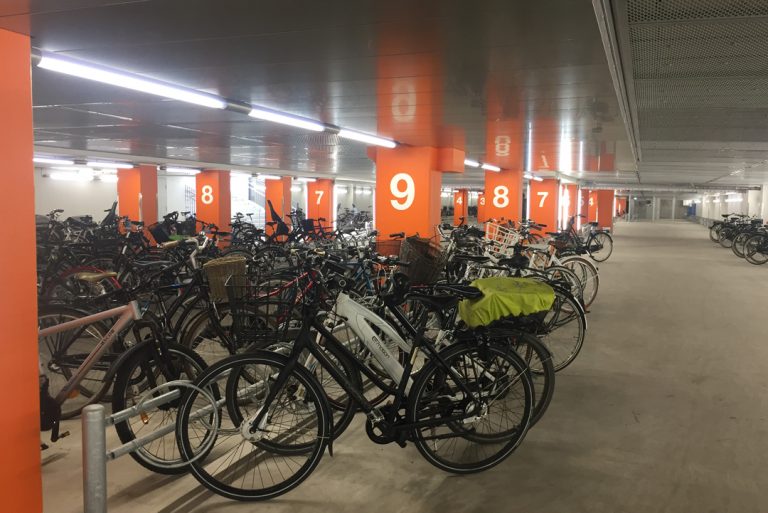 “It just takes five minutes”. Pictures taken before and after tidying up illustrate how the combination of accessible bicycle parking and effective tidying up ensures good accessibility and a pleasant urban space for everyone around the station.

The spread of bike-sharing

The world’s first modern bike- sharing system started in Copenhagen in 1995. Since then city bikes (shared bikes) have undergone a tremendous transformation, and other cities and countries have overtaken Copenhagen and the rest of Denmark.  However, there is a continued focus in Denmark on improving access to bike -sharing at stations. These three types of bike share, for example, are currently operational:

All three types require permission from the local authority to operate on public roads.

Cycling connections to and from stations

Regardless of how easy it is to bring bikes on trains or rent bicycles at stations, it’s to no avail if cycling conditions to and from the station are not satisfactory. For information about the work of creating a good network of cycle connections see the articles on planning and designing the cycling infrastructure. 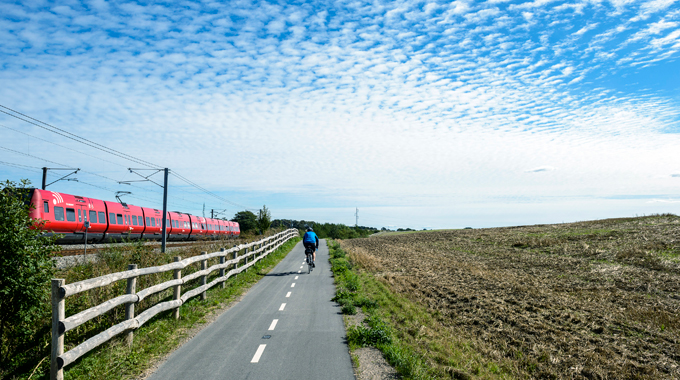 Bikes are often allowed on busses or on a bike rack mounted on the bus. In Odense bikes are allowed on city busses outside peak hours.

Cycle superhighways and trains in the capital region of Denmark

Cycling for long distances is common on the cycle superhighways. The average trip is approx. 15 kilometers on many routes. The routes are coordinated with the S- train network so there is easy access at stations. This ensures an excellent connection between bicycles and trains. Travelling becomes more flexible since travelers can cycle out and take the train home, or they can cycle a bit further to a station with better connections if they don’t want to change trains, or if it starts to rain they can just hop on the train. In other parts of the country the cycle trip can typically be combined with the local railway stations.

ITS solutions for cyclists

For decades ITS has been primarily concerned with optimizing traffic flows and capacity and reducing travel times for motor traffic. However, over the past 20 years planners have begun using ITS solutions to improve cyclist accessibility, flows, and safety in traffic as well.  New technologies and i…