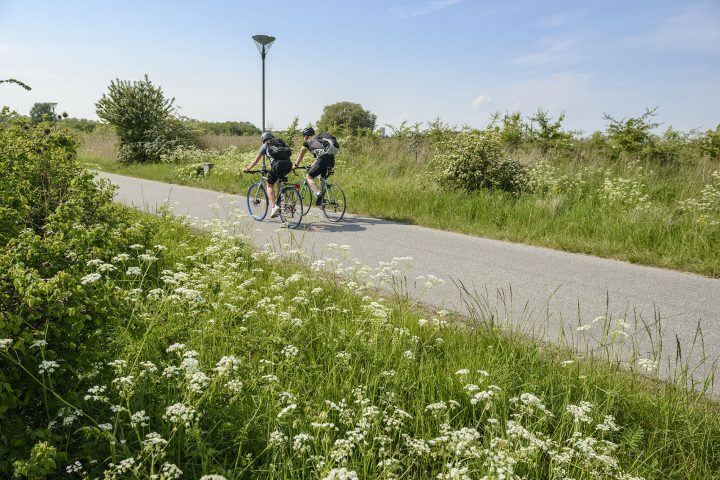 Cycling infrastructure is an asset to society. The greatest gains are in the field of public health for example due to reduced sick leave. An economic analysis can calculate the specific costs and benefits of a given project and assess whether or not it’s a good investment.

By Anna Garrett, the Office for Cycle Superhighways 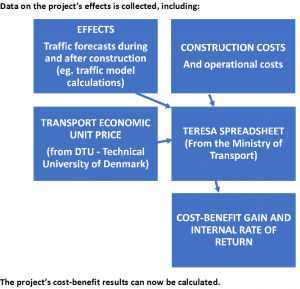 Figure 1: A cost-benefit analysis is born:

Bicycles are included in the economics

In order to treat bicycle traffic on equal terms as other transport forms and to improve decision makers possibilities to prioritize the transport area its a prerequisite to have a solid planning foundation.

No value was assigned to cycle trips until 2009 so it was not possible to calculate the cost-benefit of cycling infrastructure and cycling measures before then. In 2009 this was done by COWI on the initiative of the City of Copenhagen, and since then the value of cycle trips along with other transport modes has been updated by DTU on an on-going basis.

The economics unit costs consist of two parts: the effect on the individual road user and the effect that the individual’s choice of transport mode has on the rest of the society. In economic terms these are called internal and external costs. The internal costs include the cost of time, vehicle wear and tear, fuel (in the case of motor vehicles), and health. The external costs include expenses incurred by traffic accidents, hospitalization, environmental considerations, congestion, etc.

Table 2 shows the unit price in DKK per kilometre travelled by bicycle, car and walking. The table shows that there is a relatively high time cost for the individual cyclist since cycling speed is lower than car speed. However, the personal health gain is almost as high as the corresponding time cost. There are also health gains among the external effects including saved medical costs and added value at work due to fewer sick days. 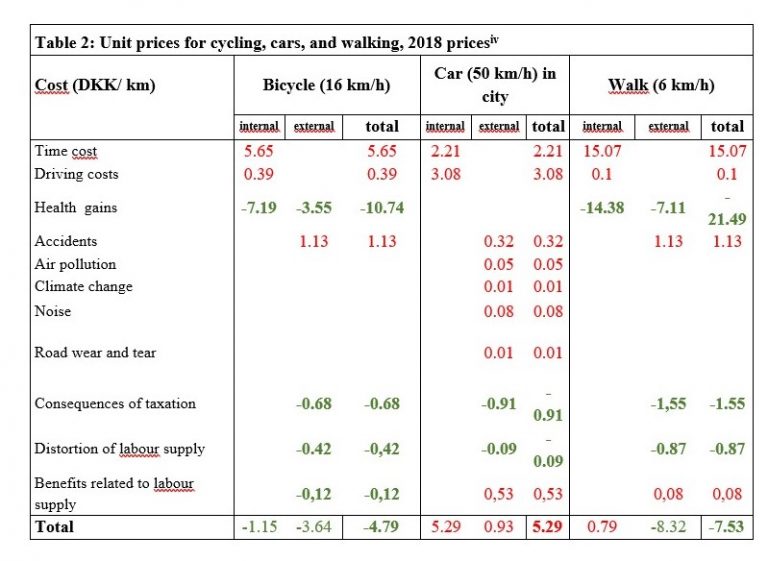 When all factors are calculated, society gains DKK 4.79 per kilometer cycled, primarily due to the large health benefit, whereas it costs society DKK 5.29 for every kilometer driven by car. 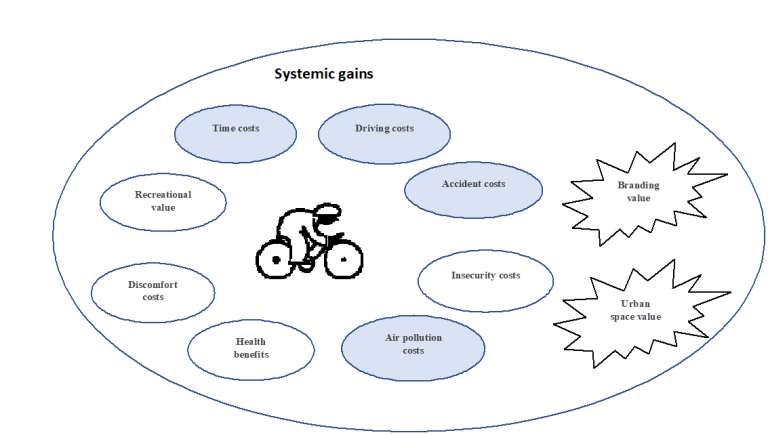 Altogether the economic benefit by one kilometre cycled is DKK 4.79 (€ 0,64) when all valuated effects are included. This means that the economic cost of cycling is much lower than the cost of car transport if the car does not contain more than 1 or 2 passengers. Society consequently saves at least DKK 10 per kilometre (€ 1,34) when people cycle rather than drive (DKK 4.79) per kilometre cycled (€ 0,64) deducted from DKK -5.29 per kilometre driven by car (€ 0,71)). Switching from car trips to cycle trips is thus an excellent investment. And the benefits are even better for some places. For instance, it’s assumed that cars drive at 50 k/h in cities. However, in many larger cities cars will drive at a much lower speed during peak hours. Add to that the time it takes to find a parking place and the walking distance, and it becomes even more profitable to invest in cycling promotion.

The internal interest rate is a measure of the annual cost-benefit return on an investment. In order for a project to be socio-economically profitable its internal rate of return should be compared to an alternative rate of return of 4% (Danish Ministry of Transport, 2015).

Examples of infrastructure projects and their calculated internal rate of return:

The overall cost-benefit of increased cycling

The Confederation of Danish Industry and Incentive ran a scenario study of two different scenarios: either more or less cycling in the capital region of Denmark. Four traffic models were run, two scenarios where bicycle traffic in the capital region drops by 67% and 33% respectively, and two scenarios where bicycle traffic rises by 22% and 35% respectively. 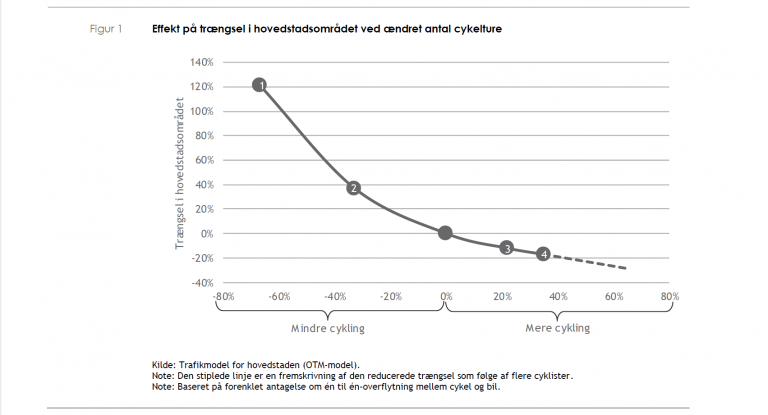 The analysis shows that if 10% more kilometers are cycled there will be an annual socio-economic gain in Denmark of DKK 1.1 billion (€ 150 mil.). In the capital region the annual gain will be approx. DKK 0.5 billion (€ 70 mil.). For purposes of comparison the Danish regional health authorities spend approx. DKK 15.3 billion (€ 2 billion) annually on general doctor-practices.

Cost-Benefit Analysis of the cycle superhighways 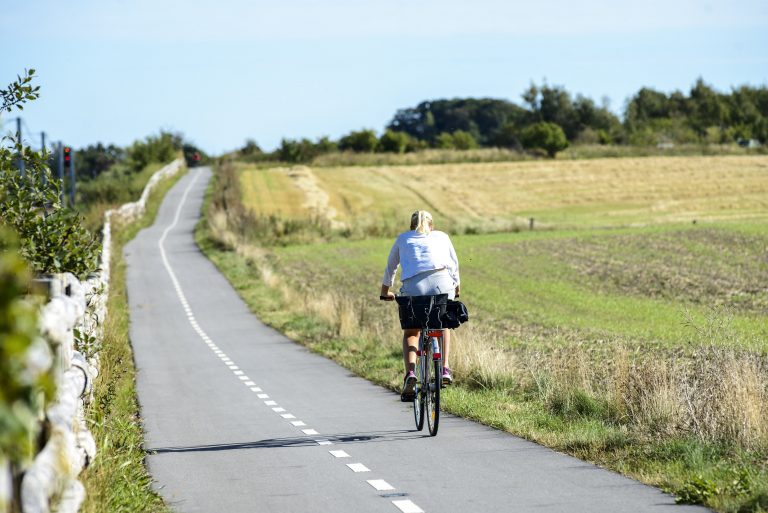 The total 750 km network of cycle superhighways in the capital region of Denmark involves an estimated investment of more than DKK 2.2 billion (€ 29 mil.). An economic analysis shows that the route network taken as a total investment has an internal interest rate of 11% and a cost-benefit gain of DKK 5.7 billion (€ 76 mil.). By comparison the Metro City ring has an internal interest rate of 3%, the Femern tunnel 5.4%, and the Herning-Holstebro motorway 8.2%. Cycle Superhighways ranks among the top five most profitable projects in a survey of all economic analyses of Danish infrastructure projects.

When the benefits are distributed over State, regional and municipalities it becomes clear that construction costs are not placed where the benefits are gained. It is primarily the State that benefits from the saving on health costs while the municipalities benefit from savings on construction and operations. This means that in the three scenarios where the State pays 0%, 50%, and 100% respectively, it is always the State that reaps most of the benefits since the local authorities must bear greater costs of maintenance and operations.

The route network is spread over the entire region and consequently construction costs and estimated potential vary accordingly. This means that if the route network is ranked correspondingly then the interest rate of certain cycle superhighways is significantly higher than others. This is primarily due to the fact that benefits are mostly generated by existing cyclists, which means that areas with a previously low bicycle share will have significantly lower benefits. 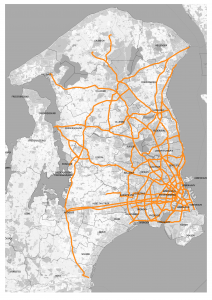 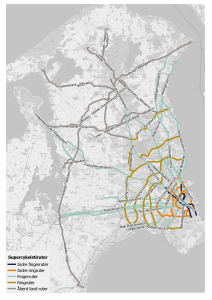 The Bicycle Snake (Cykelslangen) is a 235-meter bicycle bridge connecting Islands Brygge Bridge with Dybbølsbro and Vesterbro. It was completed in 2014. It cost DKK 31.5 million (€ 4,2 mil.), but an economic analysis shows that the bridge has a total benefit of DKK 44 million (€ 5,9 mil.), and an internal interest rate of 9% over a 20-year calculation period. A large part of the total gain is due to time saved and increased experienced accessibility for existing cyclists. Since cyclists save some kilometres cause of the bridge there is an increase of health costs for the individual and for the society. Other gains include new cycle trips and new switched trips from cars and public transport. 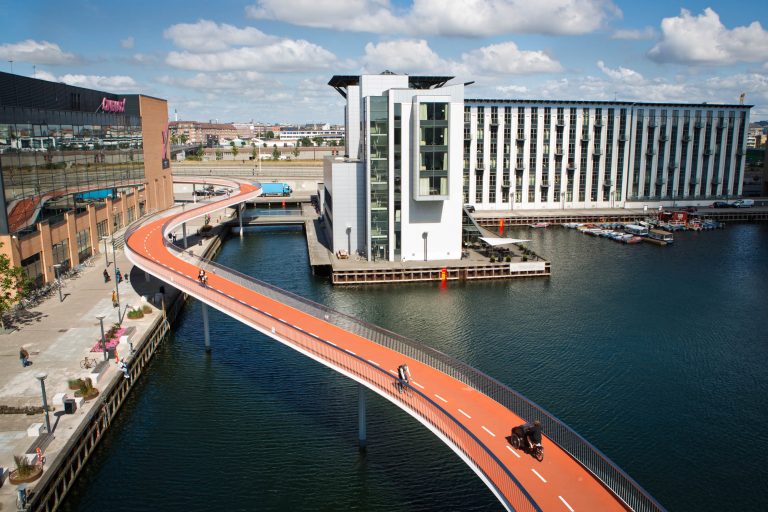 In 2018 did the consulting house Realise drew up a proposal on the initiative of the City of Copenhagen for unit prices for walking. This is the first time an economic analysis of walking was developed in Denmark. Walking requires more energy than cycling, so the health effect is greater. In terms of the total effects at the person level there is a higher cost when a person walks one kilometre due to the increased cost of time. But on a societal level the health benefits derived from walking makes it the most profitable transport mode from a cost-benefit point of view, with a societal gain of DKK 7.4 per kilometre walked (€ 1).

Hopefully economic analyses of cycling and walking projects will become higher prioritized and have a greater significance for infrastructure investments, and hopefully the future will bring more knowledge of the effects of cycling and walking projects and thereby improve the accuracy of their evaluation. This would strengthen the political cycling agenda locally in the municipalities as well as the State level and create a basis for prioritizing cycling infrastructure projects on equal terms as other infrastructure projects. In addition, the economic analyses can illustrate the broader effects of bicycle traffic. The health authorities could for instance become more involved in bicycle traffic since greater bicycle traffic can be used as a preventive health measure.

A high bicycle share in cycling cities such as Copenhagen and Amsterdam are not only beneficial from a socio-economic point of view. Another beneficial effect of the cities’ good cycling condition is the turnover and the jobs created by enterprises that sell and produce bicycles. Danish and Dutch studies show the direct economic impact of the bicycle industry.

Holland and Denmark are non-car-producing countries. Holland has carried out studies to determine what this means for the economy. In Holland consumption of cars and fuel are not necessarily economic gains. Cars and oil are import commodities in Holland, which means that financing and subsequent employment does not take place in Holland. Cycling on the other hand requires neither imported cars nor imported fuel. Holland annually produces more than 400,000 bicycles.

Studies show that Holland is the country in the world that invests most heavily in cycling infrastructure. (Danish figures for 2009 and Dutch figures for 2010). However, distribution among the different transport modes still varies when it comes to the number of inhabitants and the number of kilometers cycled.

The connection between cycling and shopping is important, because cycling infrastructure prioritization can mean a reduction in need for parking spaces. Several cities in Denmark and abroad have analysed the actual turnover depending on whether the shopper arrives on foot, by public transport, by ca…