Children should learn to cycle at an early age. This is the basis of a healthy, sustainable cycling culture. It calls for an ongoing focus on cycle training and traffic safety on the part of parents, schools, day care institutions, and the authorities.

In Denmark learning to cycle is a natural part of childhood for most children, and is a skill we tend to take for granted. However, Danish children actually cycle less and less even though it’s common knowledge that cycling in childhood has a number of positive effects, on health in particular.

In recent years there has been an increasing focus on the importance of passing the traditional cycling culture on to new generations. Many Danish local authorities, the Danish Road Safety Council, and Danish Cyclists’ Federation are among the players that have put considerable effort into carrying out educational campaigns, both large and small. The measures are often initiated in a co-operation among schools, day care facilities, local authorities, and organizations with funding from various foundations.

A good example is Trafik i børnehøjde (traffic for children), a holistic teaching concept that involves school children in improving traffic safety around their school.

A focus on children’s cycling is also on the political agenda on the national level, and there is widespread cross-party support for strengthening children’s opportunities for everyday cycling, backed up by a large majority of the population. Consequently the state has set up a pooled fund to support local authority initiatives to make school routes safe. However, further measures are necessary to reverse the trend and encourage more children to cycle.

The responsibility of parents, schools and local authorities

Traditionally, cycle training is a family matter with parents teaching children to cycle as they approach school age so they can cycle to school, friends and after school activities on their own. This is an excellent model in a society where cycling is the norm.

However, the model becomes vulnerable when adults increasingly choose the car for everyday errands, when the distance between school and home is too great, or when traffic safety on school roads is poor. It is crucial that schools, day care institutions, and local authorities support children’s cycling so the sole responsibility doesn’t rest with the parents.

What the local authority can do:

What the school can do:

What parents can do:

The classical image of cycle training is a mother or a father grasping a broomstick on the back of junior’s bicycle and running behind while the child pedals along trying to find his balance. Generations of cyclists can attest to the fact that this is an excellent method.

However, a more modern approach to children’s motor development shows that you get even better results with other methods. Most two year olds can learn to ride a so-called balance bike, a small bicycle without pedals where the child pushes himself along with both legs.

The balance bike has become extremely popular among families and day care institutions ever since it came on the market in Denmark 15 or 20 years ago. The balance bike effectively develops the child’s balance, and makes the transition to a real bicycle with pedals much easier. It also gives the child and the family access to active transport before the child is ready for a pedal bicycle. 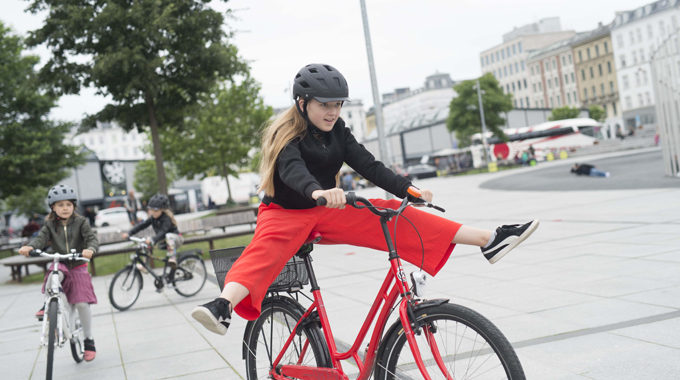 Danish Cyclists’ Federation in cooperation with motor skills educators and with funding from TrygFonden developed a brand new concept for cycle training called bicycle games. The basic idea is that the best way for a child to master a bicycle is by playing in a traffic-safe area before going out into traffic and learning the road rules.

Children learn how to master the bicycle in a number of fun bicycle games that train their ability to accelerate, brake and ride in different types of terrain and with obstacles. When the bicycle feels like a natural extension of the body it’s much easier for children to find their bearings and remember the road rules, and at the same time develop a positive relationship with cycling.

Bicycle games have become widespread in Denmark since 2010 through the book Cykelleg (Bicycle Games) and its website, and the popular Vi Kan Cycle! campaign (we can bike!)

Odense municipality is particularly active in promoting bicycle games, where a permanent staff member and two assistants arrange bicycle games in all schools and nursery schools.

Cycle training calls for good, traffic- free areas where small, new cyclists can romp freely as they acquire the necessary cycling skills. Unfortunately not all local authorities can provide such areas.

The bicycle playground is an inspiring route network with hills and obstacles and good free areas for fun and play. The idea has been implemented in a number of Danish cities as part of a larger project developed by Danish Cyclists’ Federation and funded by the Nordea foundation. Read more on http://www.cycling-embassy.dk/2015/01/30/10-danish-cities-get-bicycle-playgrounds/ .

The focus of the traffic playground is traffic structure and road rules. The playground imitates real traffic with roads, intersections, signage, markings and traffic lights, and creates a concrete framework for traffic training where children can visualize themselves as a driver, a cyclist or a pedestrian.

A number of Danish local authorities regularly draw up school transport surveys. School children are asked to report by a show of hands how they get to school, whether they use bike helmets, and whether they feel secure on the school route. Based on this data the local authority can then monitor the development of school children’s share of active transport and compare different schools’ results.

Danish Cyclists’ Federation and the Danish Road Safety Council generally recommend that children should not be allowed to cycle in traffic without adult supervision before the age of ten or twelve, depending on the type of route and the maturity of the individual child. But the right age and degree of maturity are not necessarily enough.

Traffic safety requires training and an on-going focus, and it makes sense to begin cycle and traffic training early so the child is prepared when the day comes when he or she has to cope with traffic alone.