For the optimal function of modern urban society, roads and cycle tracks must be passable and safe, allowing road users to move about freely and safely regardless of the season or the weather. Consequently, effective measures need to be taken to deal with the problems caused by snow and ice during the winter.

It is the road authority’s responsibility to address snow clearance and slippery road conditions on roads and paths under the jurisdiction of the local authority (in accordance with the law of public thoroughfares §62).

Roads and paths are divided into different winter classes. The categories are defined by the road or path’s importance for traffic flows, and service objectives are prioritized accordingly. This optimizes the use of resources and achieves a good mutual balance between traffic concerns, the environment, and funding.

Cycle tracks should have a high service level as snow and ice are a serious problem for many cyclists. If cyclists are to continue cycling during the winter months, it is crucial that they can expect cleared cycle paths and tracks when they go back and forth to their place of work or education, etc. In addition, cyclists should never be tempted to use busy carriageways instead of cycle tracks.

In practice, roads and paths fall into four winter clearance classes (I, II, III, IV) according to their importance for road passability and traffic flows:

are so crucial to bicycle traffic, and indeed for society as a whole, that they must be kept passable  with no significant obstacles 24 hours a day 7 days a week.

Class IV: Low priority paths such as recreational gravel lanes. These are not normally included in winter maintenance planning and are only cleared occasionally. 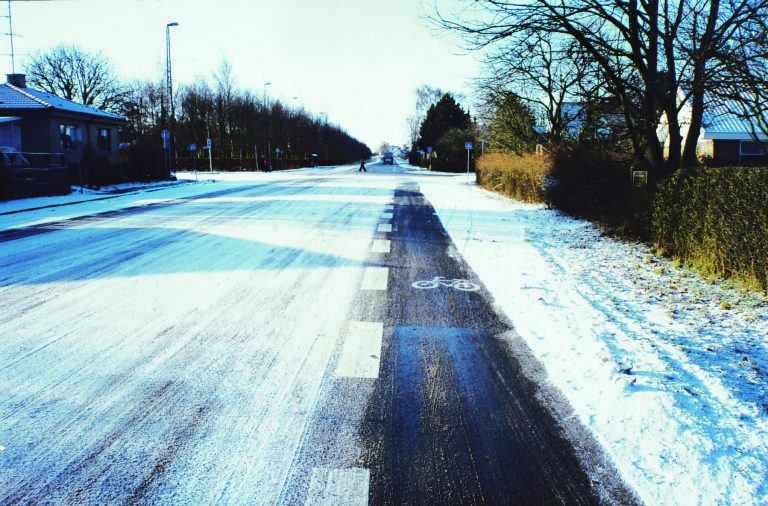 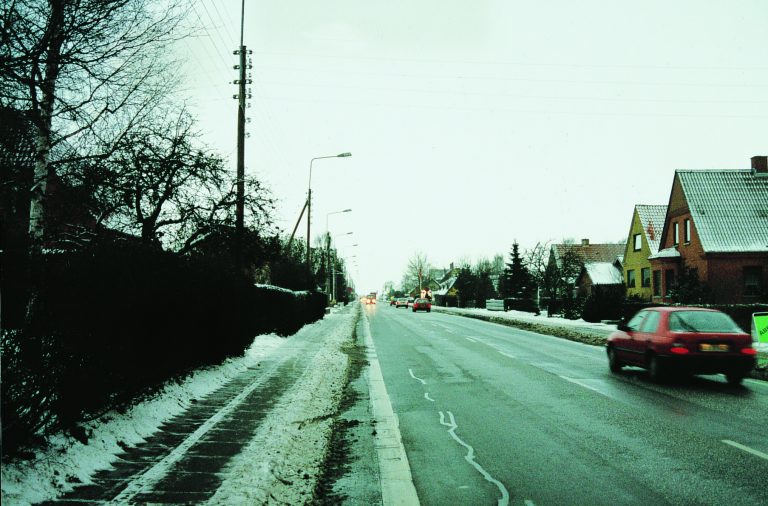 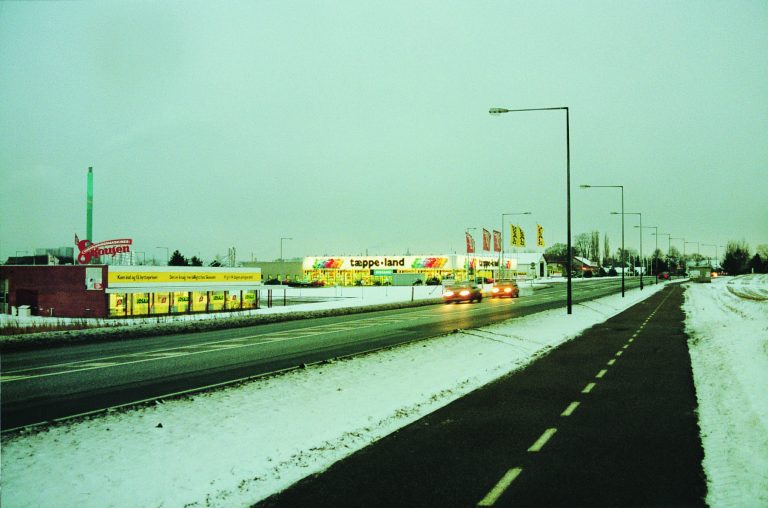 De-icing of paths may be carried out by traditional salting, gritting, by spreading salt brine solution alone or in combination with other thawing agents. The various thawing agents impact the environment in varying degrees and additionally have different melting properties. The effect of the anti-icing agent depends on the temperature; generally speaking, the lower the temperature, the smaller the effect.

The overall environmental impact of thawing agents can be described as follows:

Some thawing agents have been certified by the Nordic Swan ecolabel.

When trying to completely avoid the use of chemical thawing agents, using only salt, grit, or sand, it should be borne in mind that the latter also have a negative environmental impact, and in addition increase the risk of flat tires and skidding. Furthermore grit is not a thawing agent and simply increases friction. Grit often ends up in the sewer, which has to be cleaned continually, and since the grit is mixed with dangerous chemicals, the residue, in other words what remains lying on the roads and cycle tracks, has to be stored at a hazardous waste landfill. In Denmark there is a fee for using such a landfill. Furthermore, road markings are worn off when grit is swept, which can mean higher costs for new road marking. In addition, grit must not contain sharp pieces of flint.

On the basis of meteorological forecasts and road data from stationary measuring stations, preventive salting can be carried out prior to coming snow or rime precipitation. This is often seen in connection with Class 1 service objectives.

It is crucial to first remove any snow or other precipitation either by sweeper or snow-plough for optimal de-icing.

In Denmark snow clearance and cycle track de-icing are normally carried out by the same vehicle equipped with a sweeper and a plough as well as a salt spreader/applicator. When it comes to snow clearance, the snow is normally piled up on the kerb between the cycle track, pavement and carriageway, but when it comes to small cycle tracks and cycle lanes the snow must be removed by motor vehicle.  Removal is extremely high cost, and is only feasible where it is most critical.

Regardless of the weather or the season, a high service level for cycle track cleaning is crucial. Systematic sweeping should be carried out up to four times a year, depending on the cycle track’s importance. When the leaves are falling, extra sweeping is necessary since wet leaves constitute a risk for cyclists, making them skid.

There should be a response team on call to remove objects that are dangerous for traffic and broken glass, especially on Saturday and Sunday morning on streets where an enthusiastic night life leaves broken glass in its wake on the roads and paths. 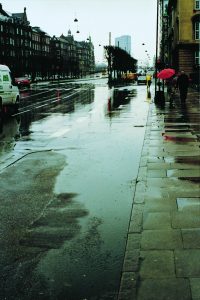 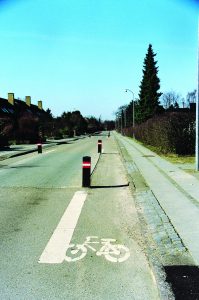 From construction to maintenance

It’s important that maintenance and operations personnel are an integral part of the construction process so they can develop an understanding of the project’s purpose and contribute their operational experience. It’s an advantage that the maintenance department is given the opportunity to check the work before the contractor’s final delivery. It is up to the construction department to ensure that any defects are rectified by the contractor during cure period.

If for esthetic reasons paving stones are to be used to pave the road, it should be borne in mind that such surfaces are more difficult and costly to maintain and clean than asphalt surfaces. Furthermore the surface is uneven, which is criticized by cyclists.

The road rules for cycle track signage state that cycle tracks may be marked by signposts (D21) or the thermoplastic bicycle symbol written on the road surface. The most cost effective choice is the bicycle symbol unless other considerations speak for the signpost. In urban areas cycle tracks are normally not signed. On the other hand, thermoplastic is a bit uncomfortable to bike on since it may be up to 0.5 cm thick.

A number of cycling accidents can be directly related to poor cleaning, including poor winter maintenance. It is not always easy to determine the actual cause of the accident since it may due to a number of factors working together. When it comes to solo accidents there are usually fewer factors involved than in the case of multi-party accidents.

Much suggests that frequent sweeping of roads and paths and faster patching of paths and roadsides can prevent accidents.  Roads with a low quality surface pose a great risk, especially for solo cyclists. 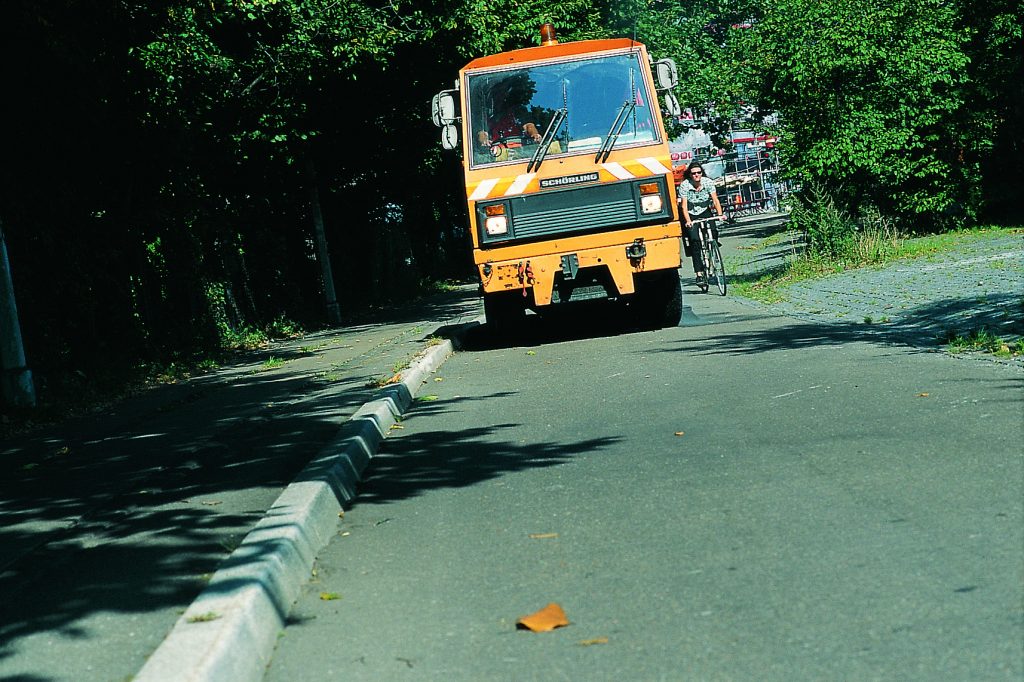 Roadworks are a source of inconvenience and danger for all road users. However, cyclists are particularly at risk when the road surface is uneven and there are often cyclist road safety issues during roadworks. Regardless of whether the roadworks are initiated by the local authority, a cable company…

Poor quality cycle tracks are best improved by major renovation. This is rarely carried out as a maintenance task, but is usually done in connection with other road reconstruction.  Renovation is costly as it may be necessary to replace the road base and drainage construction, install kerbs, and res…

There are various means of registering and monitoring cycle track condition, ranging from special measuring vehicles and specially equipped bicycles to simple, visual observation.  In the city of Aarhus, registration of cycle track condition is carried out by visual inspection by bicycle, and assess…

Cyclists are sensitive to unevenness due to repairs and potholes in the cycle track wearing course. This poses a challenge to the quality of construction and maintenance of cycling areas as well as to resources, which are allocated according to technical and political considerations. By Aros Komm…