A big bicycle bridge is a costly investment, but is usually money well spent. Bicycle and pedestrian traffic increases, and there is a new icon to promote cycling in the city. The bridge is often the missing link that can open up urban neighborhoods and create new corridors and a more livable city.

Bicycle bridges can bring cyclists from point A to point B without their coming into conflict with cross traffic and other obstacles. Big bicycle bridges are becoming increasingly common, perhaps because so many cities have developed a functional cycling network that the only things missing now are the final links. Here are some of the major barriers:

The most rational solution is sometimes a bicycle tunnel since going under a barrier requires less space than going over it. Nevertheless the bicycle bridge may still often be the best solution. Cyclists enjoy the pleasant experience of a beautiful view.  Many big bicycle bridges have become a kind of icon for a cycling city, particularly if the bridge has been designed by an architect.

A big bicycle bridge requires long term planning and budgeting. Write it into the master plan, the local plan, and the bicycle action plan, and try to find external co-financing from foundations and other players.  A ten year horizon is the norm for a big bicycle bridge.

The primary functional requirements determine the design and cost of the bicycle bridge:

The bridge should normally be dimensioned to accommodate winter maintenance motor vehicles in terms of head clearance and weight.

Another crucial factor for construction and cost is whether the bicycle bridge can be opened. 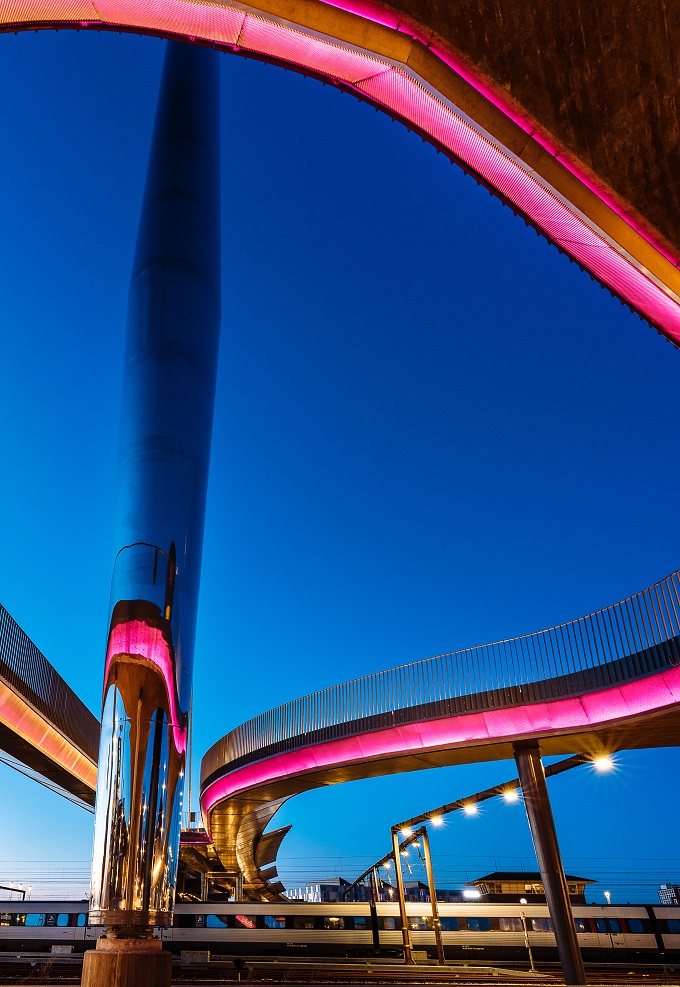 The City Bridge, Odense, has built- in lights of different colours so passers-by see it as an artistic installation. Photo: Odense municipality

Big bicycle bridges are normally designed by an architect, which certainly doesn’t make them any cheaper than a standard construction, but may create the architectural value of a major edifice or landmark that will last 100 years or more.

If the bicycle bridge is designed with one or more pylons this will make it clear that road users can cross here.

A traditional flat standard bridge, even a pre-fabricated bridge, can also be an excellent choice. Here function is the prime consideration. In addition, you may be able to get two standard bridges for the price of one designer bridge.

Estimates of bicycle and pedestrian traffic can be calculated using a traffic model among other methods. However, it’s difficult to predict the effect of a bicycle bridge when it opens up a new neighborhood and makes trips possible that didn’t exist before. For example, some of the bicycle bridges in Copenhagen have resulted in surprisingly high increases.

It will often take a while before the effect of the new bicycle bridge makes itself felt since the new bridge creates new habits, for example new recreational cycle trips or changed school districts.

In Odense municipality there are a total of 126 bicycle bridges. Most of them are small bridges over streams, typically made of wood. But two bicycle bridges are noteworthy in terms of function, form and funding:

The City Bridge links the old city center with the harbor, which is currently undergoing a major transformation. The bridge crosses 15 railway tracks and has a segregated area and several staircases for pedestrians. It was constructed after an architectural competition so the pylons look like the darning needles in the celebrated fairy tale by Hans Christian Andersen, a native son. It cost DKK 123 million.

Odin’s Bridge has a four lane cycle superhighway next to the traffic lanes. It’s the new fixed link across the Odense canal. The bridge can be opened for ships, and the world’s biggest electronic bicycle counter stands on the bridge.