Cycle superhighways are for super cyclists who want to cycle further than the majority. To that end a number of facilities can be installed on the routes to make cycling faster and easier. The cycle superhighways get more people to cycle and are an excellent societal investment. 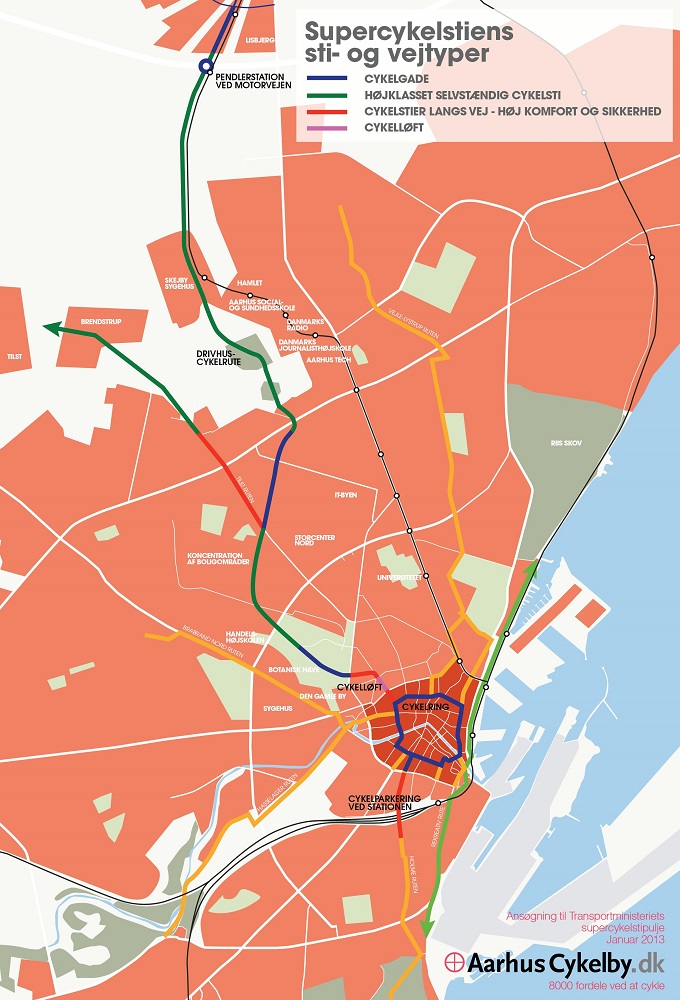 It just makes life easier, says the busy mother or father, hurriedly packing the car on a cold winter morning. It is true that the car is often the only way to get everything done, but not always.

The cycle superhighway is a new concept that aims at challenging cars on middle distances of 5-10-20 km or more. It’s the second generation of cycle routes.

It started in Odense at the turn of the millennium, and went under different names (cycle motorway, commuter route, etc.) Today, for example, the concept is known as bicycle commuter routes in Aalborg whereas cycle superhighway is the accepted term in larger cities and the capital region of Denmark.

Unfortunately, or perhaps fortunately, there is no precise definition of what constitutes a cycle superhighway because different areas have different needs, available space, and finances. Each route is often unique and is designed according to the circumstances. However, the feature they have in common is that they strive to provide an extra element that can attract new cyclists. 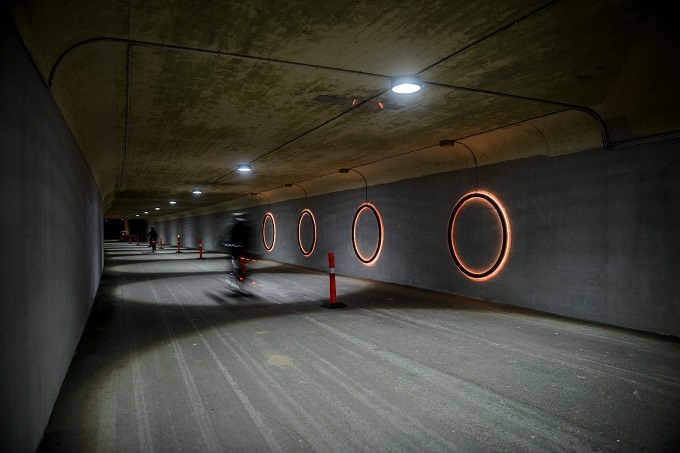 Here’s how you give a cycle track tunnel an esthetic boost by means of LED decorations. Photo Cycle superhighways, capital region of Denmark

Each local authority and region has a plan for a cohesive network of cycle superhighway routes of high quality, often across municipal boundaries. The cycle superhighway network is intended to make it easy, flexible and secure to get from point A to point B across the entire municipality/region. The cycle superhighways link workplaces, educational institutions and residential areas. The routes are constantly being expanded and usually run along collective transport routes, i.e. trains and busses, which makes it easier to combine a bicycle trip with other transport modes. This means better urban environments, less congestion, and improved public health.

The cycle superhighways are planned to provide the most direct route with as few stops as possible and a high degree of comfort. Cycle superhighways typically have even surfaces, green waves, bicycle bridges, bicycle tunnels, countdown signals, bicycle pumps, service stations, improved lighting, wayfinding guidance, and a high level of operations and maintenance. The cycle track width of all cycle superhighways is as wide as the urban space permits so there is space for the fastest cyclists as well as cyclists who simply wish to enjoy the surroundings.  The key word here is accessibility, but this must not be at the cost of the safety of children and the elderly. 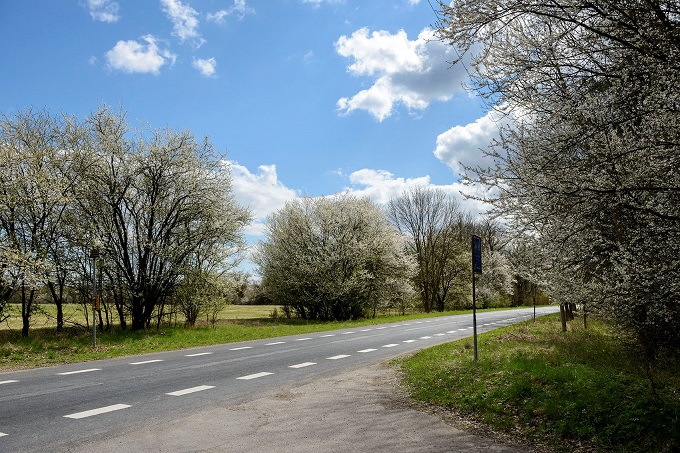 The capital region of Denmark

In the capital region 23 local authorities and the Capital Region of Denmark are working together to establish good cycling connections across municipal boundaries, intended to make it easier and safer for commuters to choose the bicycle as their transport mode. Cycle superhighways especially target cycle commuter needs, and allow cyclists to expect a continous, uniform standard across municipal boundaries. The aim of the cycle superhighways is to create a competitive alternative to cars and thereby increase the number of cycle commuters in the capital region. 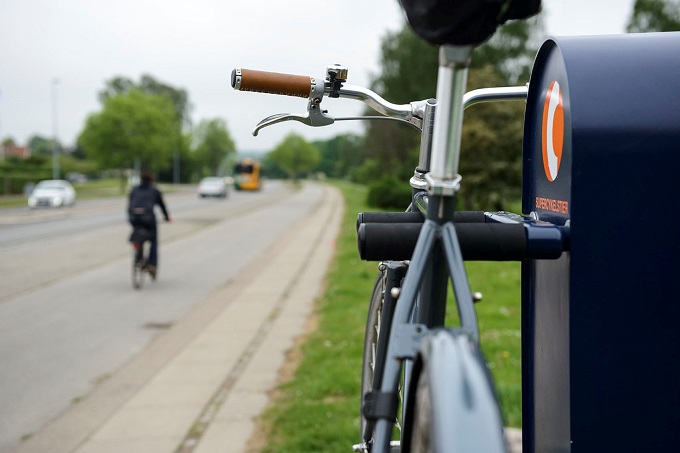 The service station makes it possible to fix a puncture or make adjustments on the way. Photo: cycle superhighways, capital region of Denmark

Advantages of cycle superhighways in Odense

The plan is that eventually the Odense cycle superhighway network will consist of 13 routes although there will not be the same advantages on all the routes:

Cycle superhighways are always cleared of snow and ice since the cycle tracks have major approach road priority.

Who uses the cycle superhighways?

Super cyclists are commuters who see the advantage of biking to and from work. It’s healthy, easy, and safe. And anyone can do it. Cycle commuters’ primary motivation for cycling to work is for exercise and health. Although cycle commuting is not always the fastest transport mode, many super cyclists consider it a time-effective transport mode because they get exercise during their daily transport. At the same time they get fresh air and a breathing space where they can relax.

Experience in the capital region of Denmark shows: 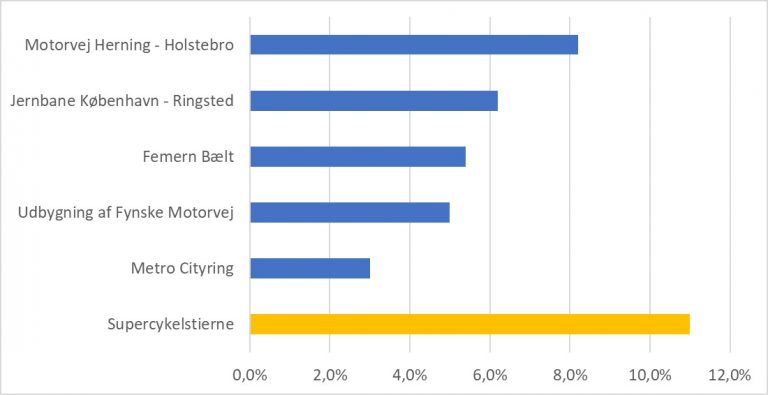 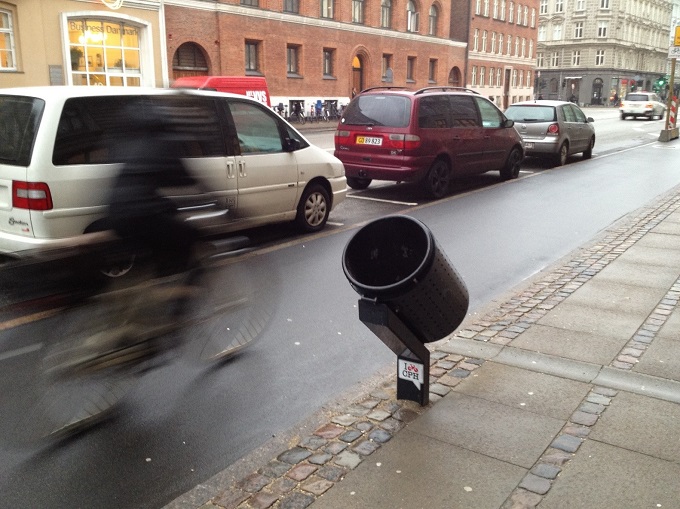 Tilted rubbish bins for cyclists are one of the details along the route that are a pat on the shoulder. Photo Troels Andersen