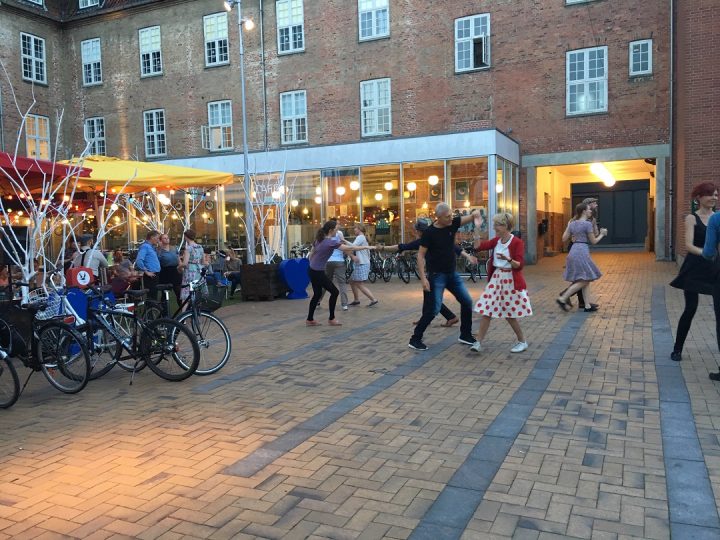 Cyclists and pedestrians should normally be segregated, but there are situations when it’s better to mix them and create a better urban life where people meet and interact. This typically applies in dense urban areas without an actual pedestrian zone.

Cycling is considered an independent transport mode in Danish planning, with the same rights to its own designated space as pedestrians. It is basically an extremely sound principle to segregate bicycle and pedestrian traffic, but it sometimes results in an ineffective solution  in areas where it would be more effective (best, even) to allow both road user groups to share the same space. The need to establish liability in case of accident means that the police or a road safety auditor might prefer that cyclists and pedestrians are segregated.

Only where there are very few cyclists and pedestrians, for example on recreational paths or tracks with a separate layout is it generally accepted that the two road user groups can cope with shared space. However, it may also be possible, for the present anyway, for the two groups to share the same space in areas with a greater number of pedestrians and cyclists, (for example in pedestrian or reduced speed zones), where pedestrians have the right of way. 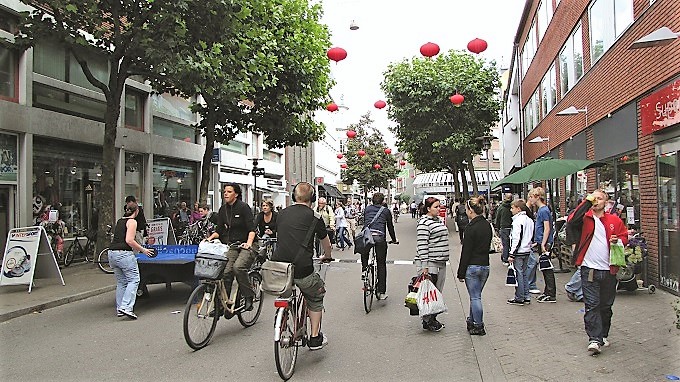 Vestergade in Odense has small speed bumps and more than 5,000 cyclists on a daily basis. The city additionally allows cycling from 9 p.m. – 9 a.m. in the entire pedestrian zone. Photo: Troels Andersen

Squares are a good example of how cyclists’ need to traverse an area is sometimes completely ignored. Cyclists should be able to ride legally. A planning authority cannot base a traffic solution on the principle that cyclists will bike illegally anyway. On the other hand if traffic planners wish to encourage more cyclists to cycle legally, they need to consider how cyclists will react in a planned traffic solution ( legally or illegally) so as to adjust the solution in order to encourage cyclists to cycle legally.

Success often depends on cyclist and pedestrian volume. If there are too few pedestrians cyclists will ride too fast, and pedestrians will feel threatened. What makes it tricky is the large variation depending on the time of day and the weather. At certain times commuter cyclists dominate, but many pedestrians on a beautiful day can be an obstruction for cyclists.

Traffic calming inspired by the Dutch  “woonerf”  led to living streets, the special residential  living and play areas in Denmark, an early example of an integrated solution. This involved detailed guidelines for physical speed calming measures to keep traffic at 15 km/h.

In addition so-called quiet streets were introduced where the speed limit is 30 km/h. Later, Denmark introduced the concept of speed zones making it possible to establish large areas in cities with a lower speed limit than normal, and with fewer physical obstacles than on the quiet streets.

The concept of shared space transfers the idea of integration to the deregulation of even large roads and intersections for the sake of beautiful architectural solutions. For example spaces are designed with a uniform road surface and signalization, and most of the road signs and markings are removed so road users have to “negotiate” the traffic situation among themselves.  This will not encourage children and the elderly to cycle, although other cyclists may be able to cope with the consciously deregulated traffic situation. Shared space solutions pose a problem for the visually impaired, which can make it complicated to develop a project that also addresses cyclist issues.