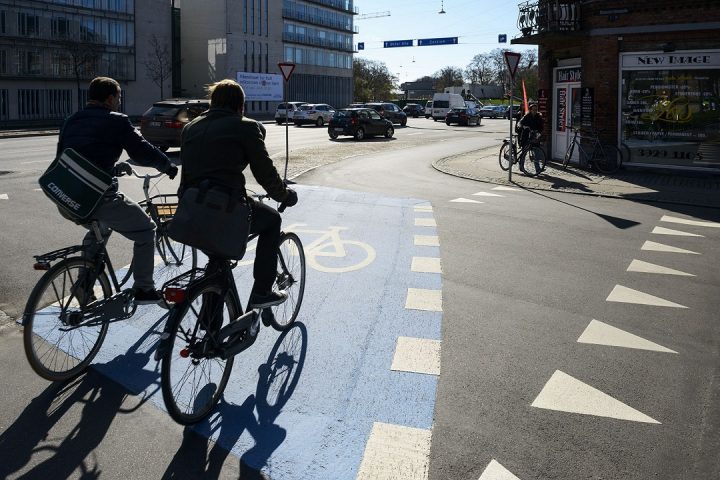 The correct intersection solution is crucial for cyclist comfort and safety. There are a number of detail solutions that make cycling easier without compromising on safety. Many of these are good, standard solutions.

In recent years there has been considerable focus on improving cyclist safety, security and accessibility at intersections.  When cycle tracks are established on road stretches, conflicts are moved to intersections, so to speak, where they must be consciously addressed. It’s very important that cyclists are highly visible, and the intersection design must make cyclists aware of other road users.

There are various options for intersection solutions depending on who has the right of way, etc. The obligation to give way is often marked by yield lines, yield signs, pavement crossings, or signalization. When this is not the case, the normal priority to the right applies, although this is quite rare.

In Denmark the “10 meter rule” makes it illegal to park a car close to an intersection. This rule gives cyclists a better overview than in many other countries where it is not unusual for cars to park legally around corners. When there are cycle tracks or cycle lanes at signalized intersections, parking and stopping should be no closer than 20-30 m from the intersection due to cyclist visibility. The dividing line between traffic lanes can often help here.

A concrete proposal for the design of an intersection should be assessed in a dialogue with a colleague or someone else to make sure the construction will work for cyclists and other road users.

Providing space for waiting cyclists, for example large numbers of left turning cyclists waiting at the opposite corner, is another important issue in intersection solutions.  Increased bicycle traffic in the larger cities is making it necessary to create more space for cyclists waiting at corners, all the more so since separate turn phases are becoming increasingly common.

At traffic light intersections the stop-line for cars in all traffic lanes should be set five meters behind  the bicycle stop- line. Setback stop- lines make cyclists more visible and reduce the number of potential conflicts at the start of the green phase.

A narrow cycle lane leading  all the way up to the intersection, instead of a shortened cycle track,  means  that cyclists don’t have to weave, and enables them to enter the intersection before cars at the start of the green phase, which enhances cyclist safety and sense of security. 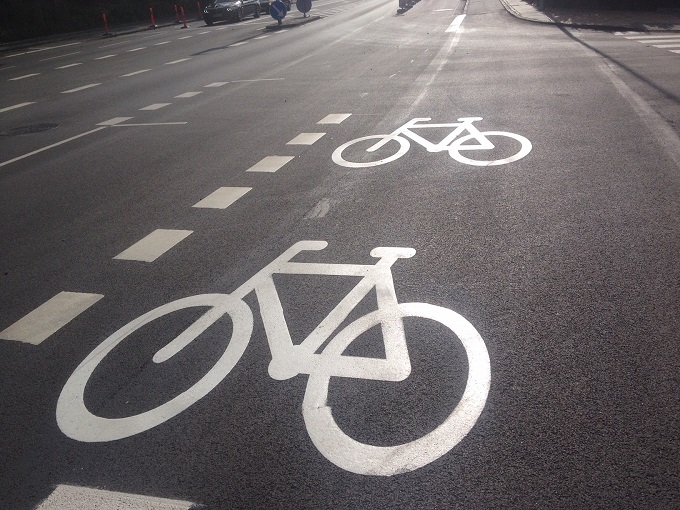 Special type of cycle crossing that can only be established in the middle of the intersection.  Photo: Troels Andersen

It’s best that the cycle track, or at least the cycle lane, continues all the way up to the stop- line. Car parking does not occur at intersection, but right turn lanes and left turn lanes for motor traffic take up a considerable amount of space. It may be a good idea to consider dropping a left turning lane for motor traffic in order to create space for something else, but of course the safety and capacity effects must be assessed first. 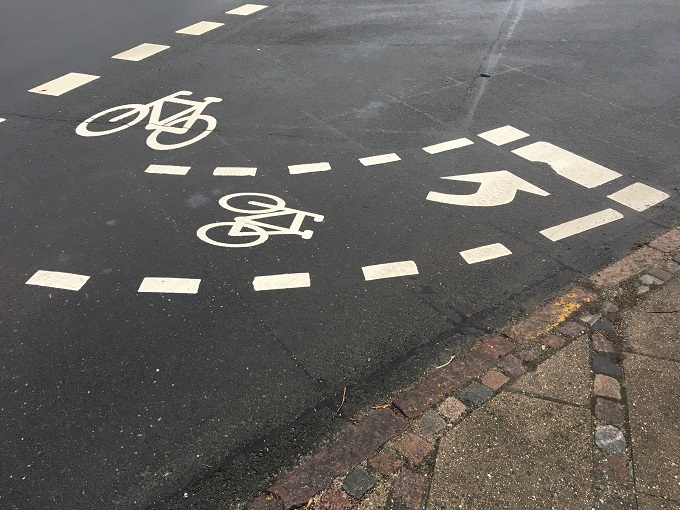 Marking the spot where left turning cyclists must wait for cross traffic. Cyclists are detected by a coil if they stop for a few seconds. Photo: Troels Andersen

When left turning cyclists have to wait at intersection corners, a coil may be placed in the road surface to report crossing cyclists. It’s a good idea to mark the placement with thermoplastic so cyclists can position themselves correctly. 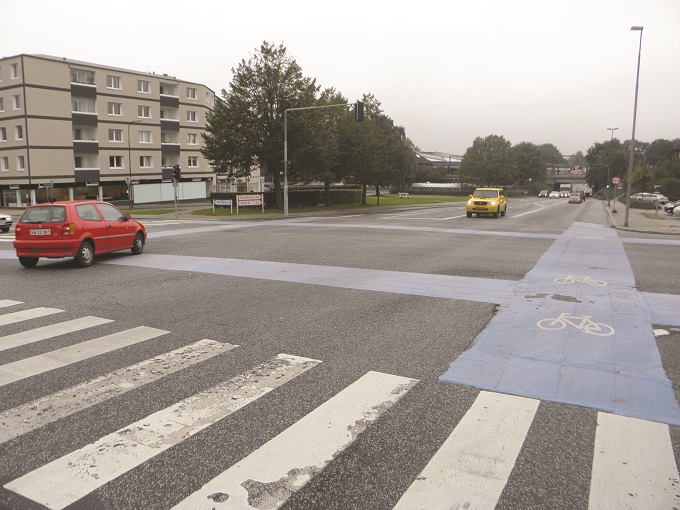 There should be no more than two blue cycle crossings per intersection, otherwise casualty rates will rise. Photo: Troels Andersen 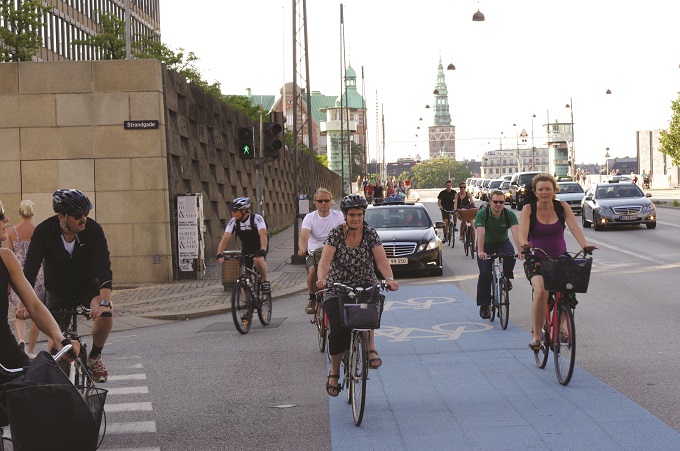 Where cycle track incline means that cyclists bike faster than normal, the cycle track is shortened for cyclist safety. Photo: City of Copenhagen

Cyclists go faster downhill. This is one of the few cases where the cycle track should be shortened and cyclists and motorists should be allowed to weave. If the cycle track is shortened, the right turn lane must be at least four meters wide in order to make weaving possible. Shortened cycle tracks make cyclists feel insecure.  Shortening was formerly very common since the design is actually quite safe. In certain circumstances it may be useful, but it contributes neither to greater cyclist security nor to more cycling.

It may be worth considering whether some of the many shortened cycle tracks in Danish cities should be extended with a narrow cycle lane up to the intersection combined with a set- back stop line for cars.

Bike boxes have been installed in various locations abroad, but are not suited to the mandatory wide left turn in Denmark.  Drivers of heavy vehicles can not necessarily see a cyclist waiting in a bike box.

Bike boxes are allowed in continuation of a right turning lane. Cyclists move through faster than in a long line of cyclists so cars get to turn right before the light turns red again. However, cyclists tend not to spread out in the cycle box. On the whole, very few intersections are suitable for bike boxes. 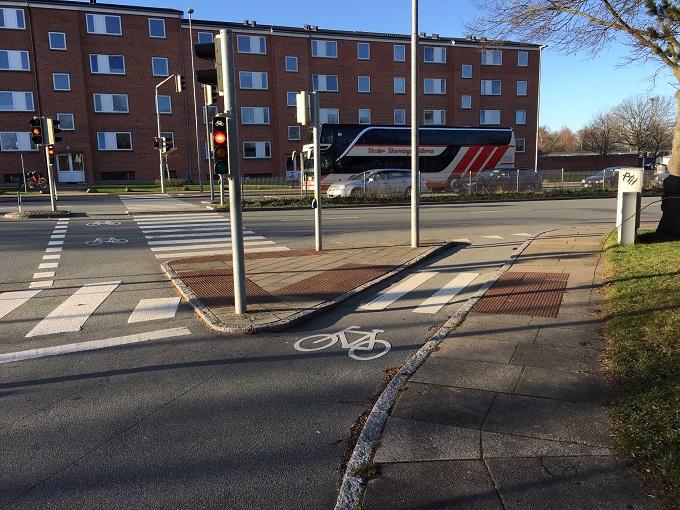 A right turn shunt for cyclists at a corner is a really good idea if there is enough space, and cyclists love them.

Planners should also consider whether it’s possible to establish a right turn shunt where cyclists can turn right against the red light. Experience in Odense shows that cyclists find this extremely satisfying, and it has no negative traffic safety effects. There must be enough space for the shunt, and pedestrian facilities can be tackled with ramps and guidance markings.

The solution is primarily used at traffic light intersections, but may also be installed at right-of-way intersections and roundabouts. The track width in the shunt must be the same as the normal track width.

New rules make it possible to establish right turn on red for cyclists at selected intersections. No additional conflicts were registered in a nationwide pilot study of 33 controlled intersections on the national road network.

The sign “cyclists excepted for right turn” (cyklister undtaget til højre) can be set up on an approach  where:

Cyclists turning right on red at the signed intersection must yield to pedestrians and to crossing cyclists.

The solution has been installed in 38 locations in Odense with excellent results.

Right turn on red at a signal controlled T- intersections

Cyclists are often allowed to turn right on red in the arm of a T- intersection when there is a right-of-way pedestrian crossing across the cycle track and cyclists must yield.  Markings inform cyclists that they must yield to pedestrians and a Cyclist excepted sign is set up on the signal stands to let them know they may turn right on red. In 2019 this solution was installed in all signal controlled T- intersections in Odense.

In the case of minor streets in urban areas a through going cycle track combined with a pavement crossing is a safe, secure and comfortable solution for cyclists.

In the case of larger side roads in cities and on roads outside cities the cycle track should be interrupted. The cycle track/lane may be continued as a cycle crossing. Blue marking may be used if particularly clear marking is necessary. 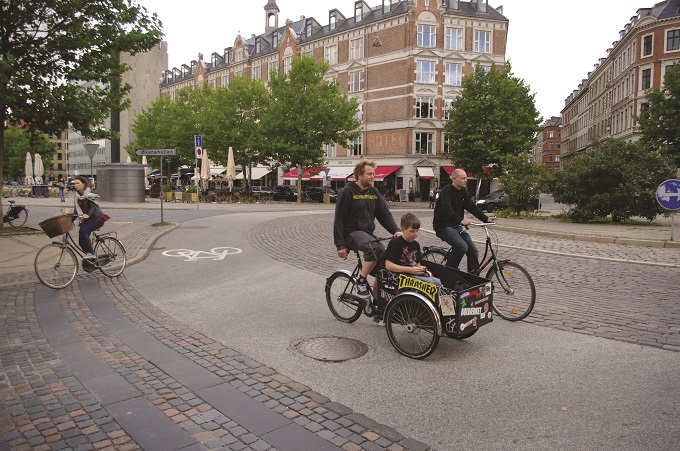 Traffic calmed roundabout with asphalted lane for cyclists all the way around.

Minor roundabouts and mini roundabouts are occasionally used as a traffic calming measure. Cars exiting the roundabout must yield to cyclists continuing through the roundabout. Drivers may perceive this situation as driving straight ahead, which is dangerous and insecure for cyclists who are turning left in the roundabout. When there are large bicycle traffic volumes, motor traffic capacity is lower than at a signalized intersection.

When it comes to major roundabouts, which are primarily used in rural areas, thought must be given to bicycle traffic management. Solutions on the same level and two-way cycle tracks combined with tunnels are both possibilities. A set- back cycle track that must yield may be a good idea from the safety point of view. One-way cycle track crossings in rural areas have also had good results with set-back crossings where cyclists must yield. On the other hand, this hampers cyclist accessibility. 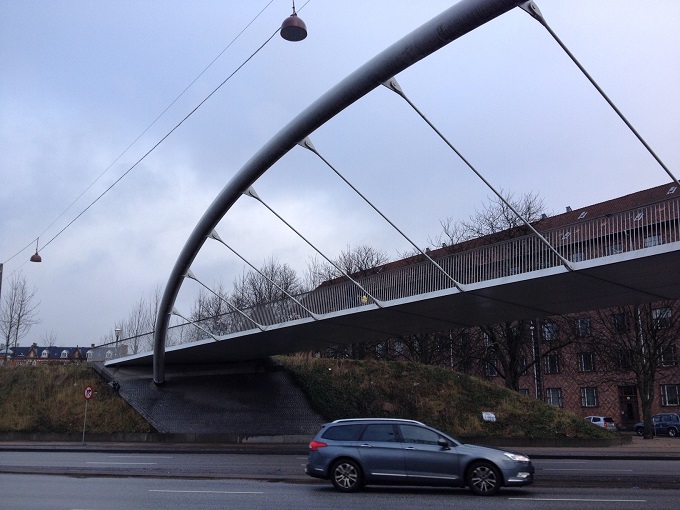 A cycle track bridge was the only possible solution here since the alternative was a signalized crossing which would severely limit motor vehicle capacity on the approach road. Photo: Troels Andersen

Bicycle bridges and tunnels are used where there are large car traffic volumes and/ or fast moving motor traffic.  Ramps must live up to the road rules’ gradient requirements, and are therefore very long. This is especially true of bridges where the bridge has to be quite high to get enough vertical clearance.

Approaches to tunnels must be wide, and it is important that users perceive the tunnel as open. Good lighting and even openings to the open sky are important elements. Malmø Municipality and Odense Municipality have done considerable work on secure tunnel design.

When it comes to crossings on larger roads between the road and a cycle track with its own layout, a traffic island makes it easier for the cyclist to cross the road in two stages.  If there is a large volume of motor traffic, a signalized regulation may be necessary. 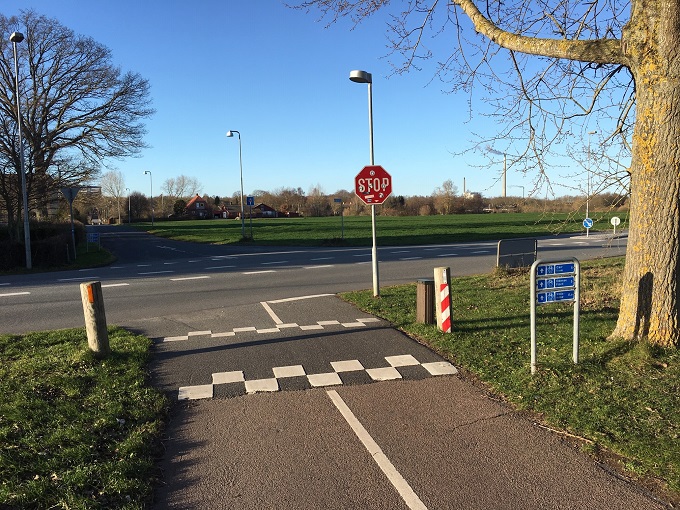 Barriers are replaced with speed bumps and a full stop sign – the solution was chosen where there are no school children.

Barriers at the start and finish of a cycle tracks are a last resort solution partly because three wheeled bicycles can rarely pass them. If they have to be used anyway the distance between the barriers should be wide enough for cyclists to bike through slowly.  Rumble strips or cyclist bumps may be necessary especially where there is moped traffic. The road rules visibility requirements must always be observed. There is an exercise for reducing the width of individual elements and prioritizing other elements at intersections and road stretches.

It’s often best that a crossing between cycle tracks is regulated by right of way.  It’s difficult for cyclists to figure out how to yield to the right. Especially where there is poor visibility duty to yield is important, and perhaps additional measures as well. All road users need to understand well in advance who has the duty to yield.