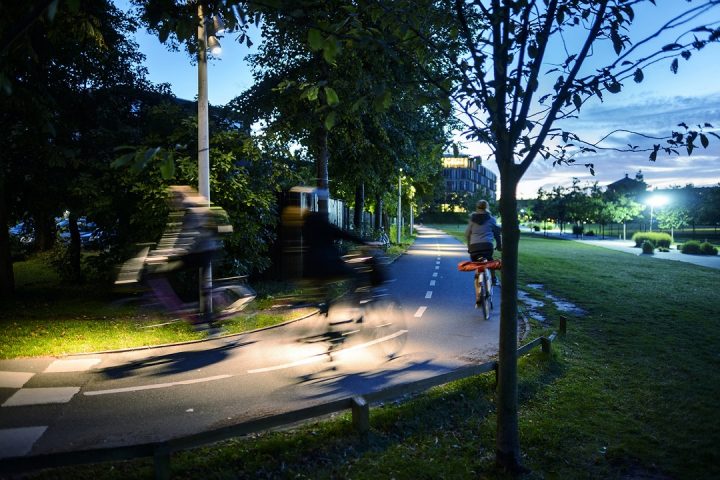 It’s important for cyclists to be able to traverse the city quickly and easily. Travel speed and the number of stops are key factors for wanting to cycle. The comfort level should be high and it should be possible to cycle safely year round.

The travel speed from point A to point B is important to the individual cyclist and on a more general level for the bicycle’s competitiveness in relation to other transport modes. Traveling speeds can be improved by making sure cyclists don’t need to take circuitous routes, for example by allowing contra-flow cycling (i.e. lower diversion factor), and by offering better accessibility  (for example pre-green for cyclists at intersections).

Even though cyclists ride somewhat more slowly on cycle tracks than in mixed traffic, perhaps because they feel secure, stretches of cycle track generally provide good accessibility since they are rarely obstructed by parked cars. However, cycle tracks can be so narrow that passing is difficult, and in some cases the cycle track doesn’t have the capacity to cope with an increasing number of cyclists, which can lead to major capacity issues.

Generally speaking it is not advisable to establish cycle tracks where cyclists don’t have enough space to pass. This creates dangerous situations and considerable insecurity since some cyclists prefer to cycle fast whereas others ride more slowly.

Traffic calming or establishing a bicycle street may be a feasible alternative to a very narrow cycle track.

Cyclists shouldn’t be slowed down unnecessarily at intersections. They should be treated on at least an equal footing with car and bus traffic, and sometimes even given higher priority. This can be done by installing green waves for cyclists controlled by the cyclist’s average traveling speed, i.e. 16-20 km /h.  Even if green waves are not installed, designing a given intersection with cyclists’ interests in mind means a great deal for cyclist accessibility.

Heavy head winds slow cyclists down. On some stretches accessibility and well- being can be improved with wind-breaking measures such as trees and other windbreaks. Canopies, trees, etc. can provide protection against rain squalls.

Stops, slow-downs, going uphill, and uneven surfaces require a greater energy expenditure on the part of the cyclist, which means lower speed. This has a negative impact on the bicycle’s competitiveness and may discourage people from cycling.  Add to this the time spent waiting, which may be as long as one minute in a traffic light intersection depending on the phase design.

Conversely, good accessibility (for example pre-green for cyclists) and few stops (for example, right turn on red at T-intersections) allow cyclists to go faster than other traffic. Odense will implement the T- intersection right- on- red solution in virtually all T-intersections in 2019. 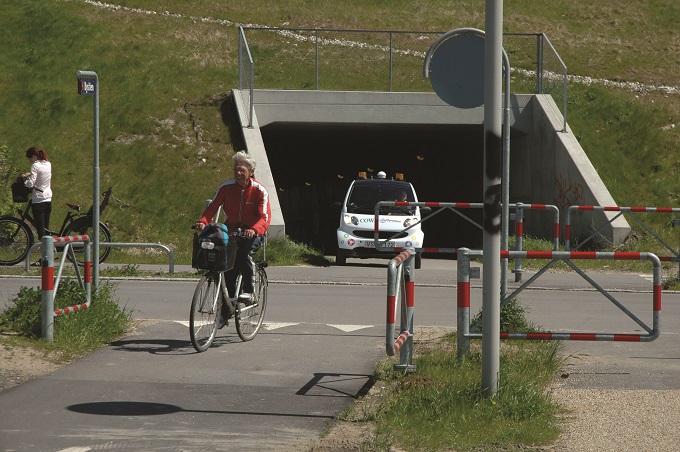 A measuring vehicle for laser measurements of road surface evenness. A sign on the back of the vehicle explains why it’s on the cycle track.

Comfort is important. An even, uniform road and path surface helps cyclists maintain speed without constantly having to watch the road. Comfort and accessibility are thereby increased, and the cyclist is free to observe other road users and attractions on the route.

Basically, there should never be potholes on the cycle track, and when they occur they should be repaired as quickly as possible in the interests of cyclist safety as well as the local authority’s accident liability. Furthermore, uneven surfaces send the signal that nobody cares about cyclists.

The local administration is used to thinking in terms of road surface life time, which is often 15-30 years, but if the cycle track should continue to have a high level of comfort, it may be necessary to apply a new asphalt concrete wearing course every ten years. The right time to do this is determined by evenness measurements or another systematic survey weighed against bicycle traffic volume. 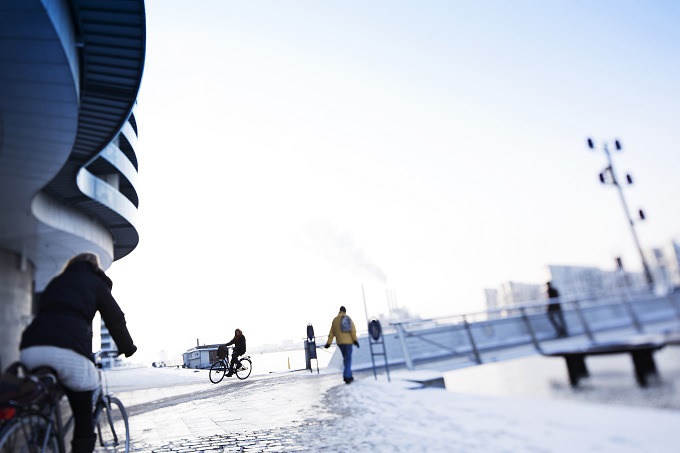 It is important that cycle routes are kept clear of snow and ice during the winter, otherwise cyclists drop out. Photo: Danish Cyclists’ Federation

Cycle tracks and routes should be passable in winter to at least the same extent as traffic lanes in order to ensure cyclist safety, security and comfort.  The number of cyclists who would benefit is a good starting point for prioritizing the stretches to be graveled, salted and cleared. Another solution is defining a main cycle track network with higher priority than the rest of the cycling infrastructure. Commuters and school children may be given higher priority.