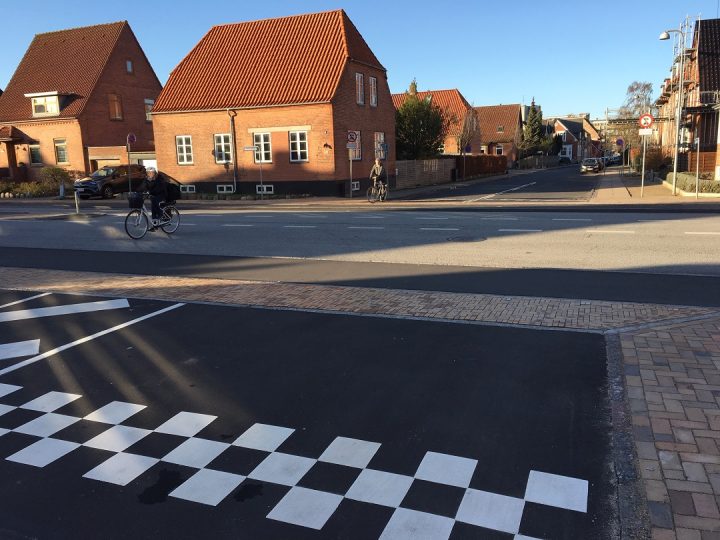 There are three types of right of way intersections without traffic lights:

The most frequent type of cyclist accident in right of way intersections are crossing collisions and left turn accidents. Serious accidents largely occur when the cyclist crosses the primary road.

Visibility and right of way

The intersection should be recognizable in advance. Be aware that buildings, planting, and parked cars can be perceived as an uninterrupted line along the road, which makes it difficult to recognize an intersection.  The intersection’s visibility can be improved by parking prohibitions, and interruptions in the planting and markings.

The verge between the cycle track and the traffic lane should be shortened well in advance of the intersection, partly to make cyclists more visible and partly to ensure optimal field of vision from the side road.

It’s difficult to turn left at large right of way intersections, for example when the primary road has four lanes. There is a relatively large risk that left turning drivers will overlook cyclists. Markings can remind drivers of the presence of cyclists, but there are also other solutions such as roundabouts and signalization.

At intersections with little traffic on the side road, the cycle track should be continued through the intersection. A continuous cycle track has a traffic calming effect on motor vehicles coming from the side road since they have to cross the pavement and often the cycle track as well. The crossing makes it easier for side road users to recognize and understand who has the right of way. In a study of cyclist safety at smaller intersections it was additionally found that the number of cycling accidents dropped by about 50% when side road crossings such as a continuous cycle track and/or a pavement were established. A more recent study showed a drop of up to 25% in cycling accidents as well as many benefits for pedestrians. 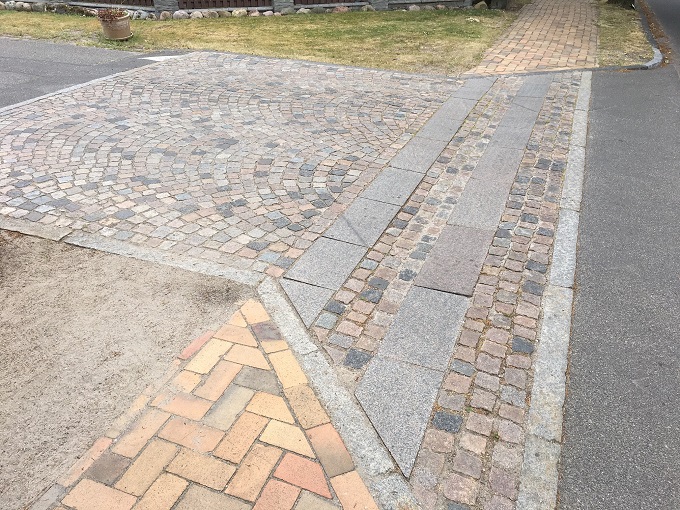 A shortened cycle track may be reinforced with a cycle crossing through the intersection to make it clear that this is a cyclist area. If there is a high accident risk for cyclists and moped drivers the cycle crossing can be applied as a blue cycle crossing. 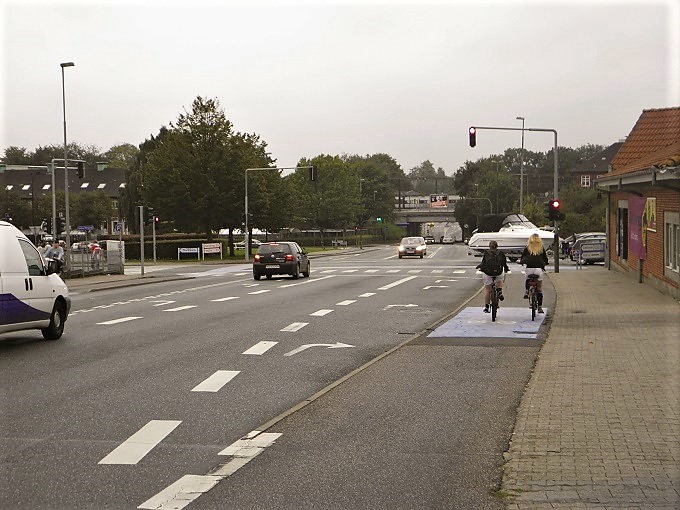 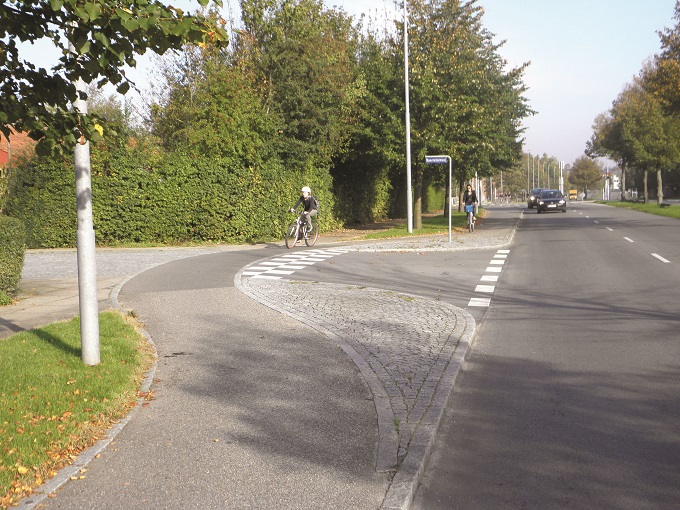 Set- back cycle track. The curve at the intersection means that cyclists can ride no faster than 20 km/h, and cars have a waiting area outside the cycle track. Photo: Troels Andersen

At intersections with heavy traffic on the primary road it’s a good idea to set the cycle track 5-7 m back from the road and lead the track across the side road on a raised surface. The set-back track makes it easier for road users to and from the side road to assess the potential risk of conflict with cyclists and gives them a better field of vision over the intersection. The set-back distance should be 5-7 m so an ordinary car can wait without getting in the way of other traffic. The raised surface is necessary to make drivers observe their duty to yield and keep them from stopping on the cycle track. If this solution is chosen it must be made clear to drivers that they must give way.

Set back cycle tracks should not be installed where there are many lorries on the side road since they cannot stop in the waiting area outside the track.

In mixed traffic it’s a good idea to establish crossings across side roads by continuing the pavement through the intersection. In addition, the curve radius should be relatively small. Pavement crossings don’t seem to have any effect on cyclist safety, but have a highly positive impact on pedestrian safety.

Two-way cycle tracks and right of way intersections are a bad combination. There are safety issues which are difficult to solve if the track runs along the primary road. The issues are less difficult if the track is on the side road and crosses a primary road.

Space permitting, the cycle track can be set back 5-7 m from the primary road and cross the side road on a raised surface. The other option is to lead the track 30-40 m away from the primary road and make cyclists give way at the intersection.  That means that cyclists must yield to all traffic on the side road. This solution is not very cyclist friendly, but may be necessary for safety reasons or for motor traffic accessibility. Setting the track back 30-40 m is necessary since it’s impossible for cyclists at the intersection to survey the traffic in all directions at once. However, there are intersections where a 10-15 m setback has proved sufficient.

The intersection can also be installed on a raised surface. However, it is uncertain whether raised surfaces affect cyclist safety.

Raised right of way intersections may mean that the right of way rules are unclear. Therefore it’s important to mark duty to yield.

Traffic calming islands on side roads particularly in rural areas make it easier for road users to understand the intersection.